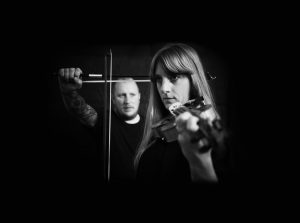 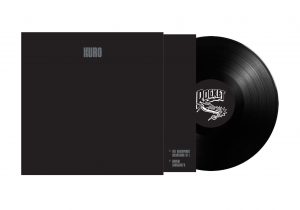 KURO take their name from the Japanese word for ‘black’, and their debut release for Rocket Recordings marks an experimental union between two diversely storied yet inherently like-minded musicians. Agathe Max, who hails originally from Lyon, is a classically-trained violinist with a varied back catalogue of studio and live work – running the gamut from spectral ambience to stately soundscapes and adept at summoning dreamstates and drama alike, her emotive and engaging work has found admirers at a number of UK festivals such as Supersonic and Raw Power.

The Bristol-based Gareth Turner, meanwhile, maintains a busy schedule performing and recording with Rocket Recordings trio Anthroprophh (alongside The Heads guitarist Paul Allen) bass/drums duo Big Naturals, and his solo double-bass project Salope, as well as working as a touring tech for Melvins on their trips to Europe. Yet despite both of these artists’ multi-faceted artistic lives, their partnership was both a natural progression and reflective of an intuitive chemistry. The result of their initial spark is perhaps both artists’ most coherent and captivating work to date.